A string of successful expositions solidly positioned the Society to take its Fair into the new Millennium. A major disaster nearly destroyed a Fairgrounds landmark, the famous Ritz Barbecue, but area firefighters and a reconstruction company came to the rescue. Boy bands became popular again and the Fair’s Grandstand was filled with screaming teens like it was during Osmond Mania two decades earlier. Country music superstars made a big statement, too. Recognizing that the consuming public wanted to know how its food gets from the farm to the table, the Lehigh County Agricultural Society went back to its original mission. 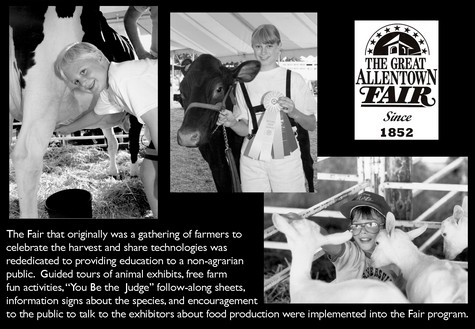 The Great Allentown Fair stayed relevant because at its roots is the sustenance of life that never goes out of style - agriculture.

The 1990s opened with more big names in the Grandstand such as Kenny G and Michael Bolton 1990,
The Judds 1991, Randy Travis 1991, James Taylor 1992 and a trio of Sharon, Lois and Bram, children’s performers who sold out the Grandstand to wee folks requiring the first stroller parking lot! 1990, 91

Grandstand stage production sets were getting bigger every year. In 1992, the roof could no longer hold the extensive lighting and suspended speakers many stars required, so the Society decided to give it a lift. The Alvin H. Butz Company reconstructed and raised it.

Reba McEntire posted back-to-back Labor Day sellouts in the Grandstand. The redheaded country superstar is one of the Fair’s most enduring and endearing performers 1991, 94, 95, 99.

June 14, 1998 - The house that Billy Ritz built, the famous Ritz Barbecue that had stood as a Fairgrounds landmark 60 years and held countless memories for the “greasers” of the ‘50s who made it their hangout and their offspring who reveled in its nostalgia, burned in a three-alarm blaze. The tremendous effort by the Allentown Fire Department, the commitment of proprietor Jeff Skinner to rebuild, and the round-the-clock exertion by The Alvin H. Butz Company allowed the Ritz to miraculously reopen in time for the 1998 Fair.

Show-band leader Bobby Mercer, who has become a staple of the Fairs during the last decade, enlarged his orchestra for “100 Years of American Music,” a tribute show and dance that closed the 1999 Fair and a complete Century in which the Society existed.

The Fair that originally was a gathering of farmers to celebrate the harvest and share technologies was rededicated to providing education to a non-agrarian public. Guided tours of animal exhibits, free farm fun activities, “You Be the Judge” follow-along sheets, information signs about the species, and encouragement to the public to talk to the exhibitors about food production were implemented into the Fair program.

*Please click on the images to see them full size.