Summer thunderstorms and oppressive August heat made Fair officials long for their old September Fair. It did not seem likely that County school districts would return to giving time off for Fair attendance, so the decision was reached to operate the Fair during the days leading up to and through the Labor Day holiday weekend. All of the factors that had affected the nation’s economy in the late 1970s - inflation, recession, fuel shortages - had taken a toll on the Fair. The Committee worked to cope with rising costs of operating the annual event and maintaining the Fairgrounds. It strived to anticipate the community’s rapidly evolving tastes in entertainment. Running a fair was no longer a simple business of handshakes. The Lehigh County Agricultural Society pulled together to keep its Fair viable and relevant. 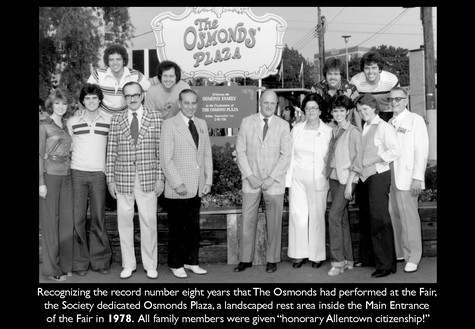 August 25-September 2, 1978 - the Fair coincided with the Labor Day holiday for the first time. Because of the time change, Goodings Million Dollar Midway could not provide enough attractions. The Society tried several carnival companies over the next few years to suitably fill the lot.

Recognizing the record number eight years that The Osmonds had performed at the Fair, the Society dedicated Osmonds Plaza, a landscaped rest area inside the Main Entrance of the Fair in 1978. All family members were given “honorary Allentown citizenship!”

World Championship Wrestling became the opening night tradition for many years at the Grandstand after premiering in 1979. The Society’s longtime relationship with Vincent McMahon, Sr., a wrestling promoter who presented televised matches in Agricultural Hall, developed another first for fairs when a ring was set up on the track for outdoor matches. Andre the Giant was one of the most memorable stars of the Fair ring in 1982.

Capitalizing on the Fair Bier Garten’s popularity, local restaurateur Michael “Skip” Germano received permission in 1980 to enclose the pavilions behind the defunct Fairgrounds Hotel on 17th & Liberty streets and operate a dance hall on Saturday nights while restoring the Hotel to its original beauty for a new restaurant. He and his wife Joan opened the Victorian-styled restaurant in 1982.

The Organ Grinder and his Monkey, a longtime attraction at the Fair, was banned from coming in 1982 because of a Pennsylvania law prohibiting wildlife from coming into contact with the public. After much lobbying, an exception to the law was made, and the attraction returned in 1983. 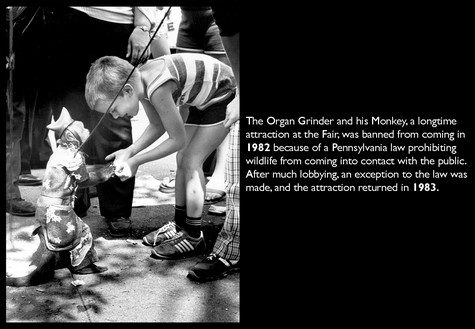 A carnival promotion called a Fantasticket that combined Fair admission and ride passage was a financial failure in 1982. The Society and its Fair officials were still not satisfied with the caliber of the carnival since the dates were changed to coincide with the nation’s busiest for fairs.

December 16, 1982 - the Society’s annual meeting erupted into a dramatic showdown when one Director, citing the Fair’s five-year loss of revenue, challenged the leadership to put the Fair’s continuation to a vote. The motion was ruled “out of order” and Chairman of the Fair’s Executive Committee, Edward Charles, asked for a year to turn the operation around.

A new craze, women’s mud wrestling, debuted at the 1983 Fair. Sounding pretty slimy, it was actually pretty funny. Ron ‘Punkin’ Miller, who was in his fifth year as “the voice” of the Allentown Fair on the public address, bragged to the Midway crowd—“This is the first time the Allentown Fair has been involved in a little bit of dirt.”

The Fair continued the International Music Festival it started in the 1970s with the most popular of attractions being Polka nights featuring topnotch orchestras such as nationally famous Jimmy Sturr’s and locally renowned Walt Groller’s. The Fair boasted a full day of attractions that were “free with admission.”

The Farmerama Theater offered contests and special events reminiscent of the early Fair. Free novelty attractions popped up all over the grounds. The fairgoer was finding a real bang for the buck and was now coming through the gates at a $3 admission with special promotions reducing the price to $1.50.

Chairman of the Executive Committee Edward Charles had the happy duty of informing the Society that a substantial profit was realized in 1983 for the first time in six years. The Fair was back on track and ready to roll.

Recognizing that it shares the community with one of the nation’s finest amusement parks, Fair officials decided not to try to outdo “Dorney.” Instead they found a carnival company in 1984 that could offer clean, safe amusements at a value to fairgoers. Pennsylvania-based S & S Amusements got the nod and produced a satisfactory show. 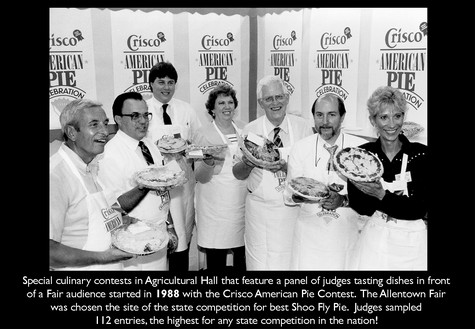 The Fair’s Bier Garten was transformed into a dazzling nightspot where patrons could socialize indoor as well as outdoors. When proprietor Skip Germano gave Executive Committee Chairman Ed Charles the “cooks tour” of the renovation in 1985, Ed remarked that it was so classy that the Fair would do well to have its “Main Gate” in the vicinity. Skip dubbed the new year-round nightclub The Main Gate.

Looking for advice and assistance from a new generation of fairgoers, the Society instituted a Fair Youth Group in 1987. Proven to be a valuable asset throughout the years, area teens still meet and perform community service at the Fair.

Special culinary contests in Agricultural Hall that feature a panel of judges tasting dishes in front of a Fair audience started in 1988 with the Crisco American Pie Contest. The Allentown Fair was chosen the site of the state competition for best Shoo Fly Pie. Judges sampled 112 entries, the highest for any state competition in the nation!