The original, agricultural mission of the Lehigh County Agricultural Story continued to be filled by the annual operation of The Great Allentown Fair, but the magnitude of the entertainers that appeared at the Grandstand increased the event’s national recognition. No other fair could boast a more impressive bill of stars. Fair dates changed from harvest time during the third week in September to an early August slot enabling television entertainers to appear before their taping season and offering night show crowds warmer temperatures.
The Grandstand was dubbed the Home of the Stars and mightily lived up to its reputation. 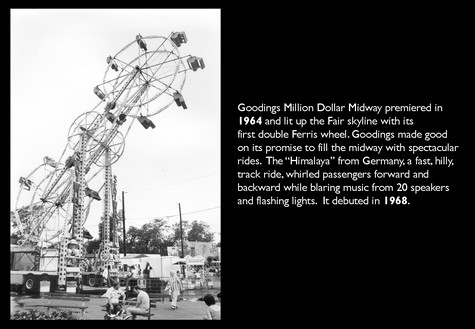 Television variety show hosts made the biggest splashes. Andy Williams crooned “Moon River” to ecstatic audiences in 1964 and he brought the Osmond Brothers back for their second Fair appearance, this time introducing a fifth member of the performing family, five-year-old Donny.

Star of the “Tonight Show” Johnny Carson made an unprecedented Fair appearance in 1967. He brought along sidekick Ed McMahon, who had been at the 1954 Fair when he was touted “Clown of the Big Top” on Philadelphia’s WCAU Channel 10. Singer Kaye Stevens joined Johnny as did a teenage banjo-picking Roy Clark, who after being with Johnny at the Fair, mentioned it every time he appeared on the Tonight Show over the next three decades.

Number One radio artists also made history at the Fair. In 1966, Herb Albert & the Tijuana Brass played to “Standing Room Only” and featured a photo of the sold out Grandstand on a later album of that name. In 1967, Motown’s most famous female trio, Diana Ross and the Supremes made a memorable appearance.

Goodings Million Dollar Midway premiered in 1964 and lit up the Fair skyline with its first double Ferris wheel. Goodings made good on its promise to fill the midway with spectacular rides. The “Himalaya” from Germany, a fast, hilly, track ride, whirled passengers forward and backward while blaring music from 20 speakers and flashing lights. It debuted in 1968. 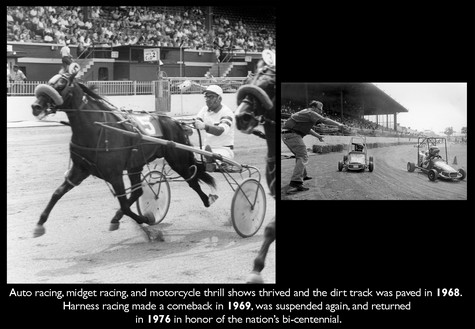 Future Farmers of America at the 1968 Fair tried to keep rural life activities in the forefront. They held contests in tractor pulling, potato picking and pie eating. In May 1974, the Fairgrounds Rural Youth Building used for holding FFA and 4-H meetings and fairtime exhibits burned down. Much Fair memorabilia and records were lost.

As the ‘70s progressed, the Midway began to encroach every avenue on the grounds. Agricultural attractions were shoved to the west end and the Fair took on more and more of a carnival atmosphere replacing charm with glitz.

The racetrack was getting interesting use during the ‘60s and ‘70s. Romper Day, which dated back to the early part of the Century when General Harry C. Trexler originated it, continued featuring county playgrounders’ activities on the racetrack including the memorable dance of the Maypole. High School Bands and Drum and Bugle Corps presented many stirring shows. Another first for a fair, the Harlem Globetrotters played on a portable basketball floor set up on the track in 1969.

Auto racing, midget racing, and motorcycle thrill shows thrived and the dirt track was paved in 1968. Harness racing made a comeback in 1969, was suspended again, and returned in 1976 in honor of the nation’s bi-centennial.

Girlie Shows on the Midway dwindled out of existence by the end of the 1970s but looking for a last hurrah, local reporter Rose Mary Jones joined the “Star and Garter Revue” in 1975. “Princess Rose Mary” did the “Dance of the Three Gardenias.” She was a complete flop! Her son pleaded from the back of the audience—“Mom, please come back to us!”

Grandstand shows in the ‘70s increased in number and stature. Singing heartthrobs from the “British Empire,” Engelbert Humperdink 1970, 72, 73 and Tom Jones 1971, 75, invaded the Fair. 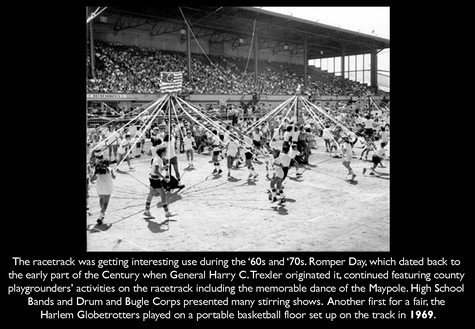 Big news females that dazzled audiences during the ‘70s included Kate Smith, who came out of retirement to perform at the Fair in 1974, and Liza Minelli, who became engaged to movie producer Jack Haley while at the Fair in 1974 and who took time out to watch President Richard Nixon give his televised resignation speech.

The 1970s’ biggest act, THE OSMONDS, drew more attendance than perhaps any other entertainer in Allentown Fair History. The little boys that appeared at the Fair in the early ‘60s came back as teenage idols every year from 1972 until 1978 except 1974 when lead singer Donny’s voice was changing. In the later years, sister Marie performed with her brothers elevating “Osmond Mania.”