America was fighting a World War on two fronts while the Lehigh County Agricultural Society continued to hold its Great Allentown Fairs brimming with patriotic themes and contributions to the nation’s effort. Soldiers enlisted and were honored on the fairgrounds, night shows gushed red, white and blue, and demonstrations of how to ration and plant Victory Gardens abounded. After the war ended, one of its most decorated generals received a hero’s welcome at “America’s Greatest County Fair.” Families went from gathering around the radio to television, and their desire to see in person the big name stars that were beamed into their living rooms prompted the Allentown Fair into becoming a trendsetter in the fair industry. 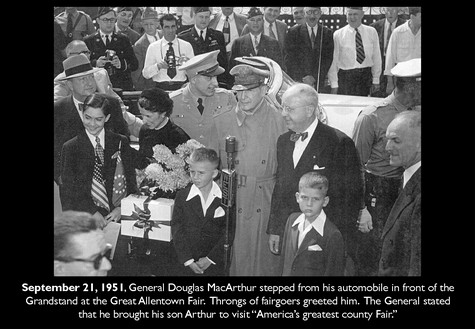 Fair admission, which had fallen back to 25-cents during the Depression, went back up to 50-cents in 1942.

World War II loomed heavily on the minds of fairgoers in 1942. While federal officials suggested county fairs suspend to ration gas and rubber, fair officials saw possibilities for the county gatherings to be productive to the war effort.

The Future Farmers exhibit at the 1942 Allentown Fair carried the theme “Future Farmers Grow Potatoes for Victory.” It was one example of how the agricultural clubs promoted the planting of Victory Gardens.

Big Thursday 1942 - 122 men were sworn into the United States Navy and marched into the Grandstand as new recruits. A War Stamp and Bond Drive was the joint effort of The Great Allentown Fair and local radio station WSAN in 1942. The showgirls from George Hamid’s revue assisted in the campaign raising over $5,000.

“Join the WAC Now!” signs were posted at tables during the 1943 Fair where young women were encouraged to sign up for wartime service.

Wartime products were featured at the 1943 Fair including an interesting Bond Bread exhibit that promoted its protein-packed bread baked with Soya flour. Bond claimed that Soya flour gives a delicious, extra-rich flavor and longer freshness to its bread.

“The Victory Revue,” billed as “the most spectacular night show ever presented at The Great Allentown Fair” debuted in 1942 and was repeated in 1943 and 1944. George Hamid paraded out Broadway’s Gae Foster Girls in a star-spangled salute to the allied forces and nations.

The death defying dancing couple, Benny and Betty Fox, wowed crowds with their jitterbug on a two-foot-in-diameter perch atop a 125-foot high swaypole in 1942. Benny performed many times throughout the ‘40s and ‘50s with several “Bettys.” Native Allentonian Betty Gerancher did the “dance of death” with Benny at the 1954 Fair.

The 1943 Fair skyline lit up with three of the largest Ferris wheels ever manufactured side by side in the middle of the World of Mirth Midway. Band concerts in the grove, a Fair staple since the 1890s, continued to provide satisfying entertainment.

After a three-year absence because of fuel rationing, auto racing returned to the Fair in 1944. The stock car racers used synthetic fuel and special designed rims to replace rubber tires like the thrill shows had been using throughout the war.

In 1950, a canvas cover went up on the Grandstand stage to protect the performers while the old horse stables along Liberty Street came down. The shift from the races to the shows as the Fair sensation was underway. In other news—Allentown Hospital reported, “A fairgoer was bitten on the arm by a gorilla.”

BIG ANNOUNCEMENT on September 6, 1951 was - “World War II hero General Douglas A. MacArthur’s first visit to Pennsylvania since his return from Japan will be at The Allentown Fair for Father and Son Day.” The Allentown Morning Call and The Philadelphia Inquirer reported the news.

September 21, 1951, Allentown’s Evening Chronicle blared the banner headline, “Welcome General MacArthur.” The front-page article stated—“General Douglas MacArthur invaded the Lehigh Valley and took it by storm. The climax of his triumphal invasion was reached at 1:45 p.m. when he stepped from his automobile in front of the Grandstand at the Great Allentown Fair.” Throngs of fairgoers greeted him.

The General stated that he brought his son Arthur to visit “America’s greatest county Fair.” MacArthur and his family enjoyed a typical Pennsylvania Dutch sauerkraut dinner. They also watched racing, vaudeville acts and the traditional cattle and horse Cavalcade—1951.

In one of the most spectacular spills in Fair horseracing history, five sulkies piled up in a heap just after passing the judge’s stand in 1951 sending all five drivers to the hospital.

The 212 acres the Society had bought along Lehigh Street in 1922 went up for sale in 1951. After nearly 30 years the Society resigned itself to keeping the Fair located at 17th and Chew.

The 100th Anniversary of the Society at its 1952 Great Allentown Fair featured an ice show, wild animal acts, four days of horse racing, auto raves, Swedish aerialists and “The Grandstand Follies of 1952.” Fair admission was 60-cents.

“Wild Bill” Schindler, racing’s No. 1 dirt track driver, was fatally injured at the 1952 Fair when he spun out of control in the second turn and flew up over the embankment and onto the service road along Liberty Street.

“Irish Horan” and his “Lucky Hell Drivers” thrilled thousands of Grandstand spectators in 1953.

“Starless Night,” a cold black mare that was raised on the fairgrounds and then sold to Ringling Brothers by George Person Stables, came back to the Fair in 1953 ridden by former Ringling Brothers and Barnum and Baily Circus star Captain William Heyer.

It was a Midway menagerie in 1954 when The World of Mirth brought a circus featuring 1 giraffe, 2 horned rhinoceros, 4 chimpanzees, 40 monkeys plus camels, zebras, gorillas, tigers and a herd of llamas—all under one tent!

“The Amazing Dancing Waters,” direct from the International Flower Show in Amsterdam, dazzled the fairgoers as they entered the Fair’s Midway in 1954.

George Hamid’s run of glitzy revues continued after the war with more showgirls, more elaborate costumes in even more spectacular dance numbers. Finally in 1955, after 30 years of producing the Fair’s shows, George Hamid took his final bow with a production that forecasted the Grandstand stage’s future—“Stairway to the Stars.”

In 1956, fairgoers wanted to see big name stars. The Society responded by booking Guy Lombardo and his orchestra producing “the sweetest sounds this side of heaven.” Mr. New Year’s Eve wowed audiences and put The Allentown Fair in the record books. It became the first fair in the country to feature big name talent in its Grandstand.

Western shows were a big hit. In addition to the singing cowboy Roy Rogers, who played the Fair in 1959 and 1962, Leo “Pancho Carillo” starred in a Wild West Show in 1956, Tex Ritter visited in 1957, and television’s Chocise thrilled audiences in a 1960 Wild West Rodeo.

The Fairgrounds was transformed dramatically from the 1950s to the 1960s. Old buildings with architectural charm came down as larger, more modern facilities went up. The 1960 Fair ran September 16-24, a record nine days.

The domed Agricultural Hall was replaced by a 40,000-square-foot exhibition hall equipped for year-round trade shows 1957-58. An exhibition space annex to the Grandstand building increased indoor space for the Fair and the year-round weekend Farmers Market 1958. The old Fair Office at 17th and Chew gave way to a new cinder block building behind the Ritz Barbecue 1960. 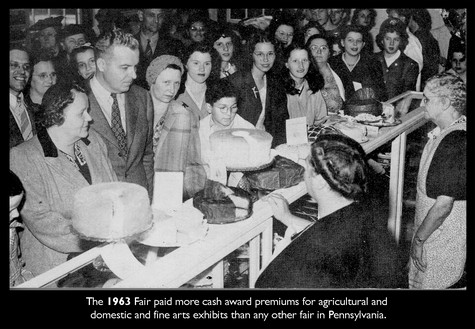 After three decades of providing the Fair’s carnival midway, the World of Mirth retired and another popular train-carried show, owned by James Strates, set up the midway in 1959. Fair admission was $1.

Auto racing was still going strong, but another tragedy occurred in 1960 when driver Johnny Thomspon was thrown from his car that crashed through a fence in the north stretch of the Fairground’s track on September 24, 1960. He died that evening.

Harness racing ceased in 1961 after being an afternoon attraction at the Fair for over 70 years!

An authentic Indian Village drew many people to see native dancing, music and Indian crafts in 1963.

The star attractions kept getting bigger and better with Minnie Pearl, Brenda Lee, Olympic ice skating champion Dick Buttons, Barbara Eden and Bobby Rydell 1960, Lawrence Welk 1961, who returned many times to the Fair with his Champagne Music and co-stars such as the Lennon Sisters, and funnyman Charlie Weaver 1961.

The 1963 Fair paid more cash award premiums for agricultural and domestic and fine arts exhibits than any other fair in Pennsylvania.