The Great Allentown Fair responded to the increased sophistication of its fairgoers introducing night shows and more intriguing exhibits. The nation was evolving from agricultural to industrial. The roaring ‘20s evaporated into the hard times ‘30s, but the Fair retained its popularity throughout the era. 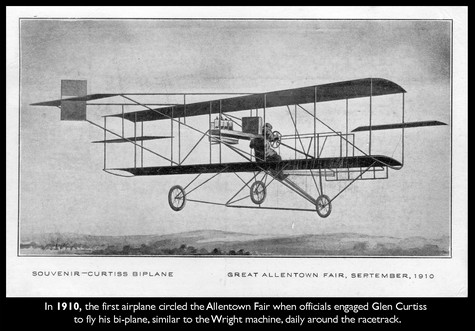 In 1910, the first airplane circled the Allentown Fair when officials engaged pilot Glen Curtis to fly his bi-plane, similar to the Wright machine, daily around the racetrack. In 1914, the Fair featured an airplane show for the first time.

A new steel, brick and concrete Grandstand, an architectural masterpiece, was completed in 1911 as a testament to the Fair’s enormous success. It seated 7,070 spectators. It cost the Society $100,000 to build. The subway under the racetrack, which is the vehicle tunnel entrance off of Liberty Street, was also constructed.

Children were forbidden to attend the 1916 Allentown Fair. Infantile Paralysis (Polio) epidemic took its toll on the population and the festivities at the Fair.

Big Thursday, an annual phenomenon at the Fair when everyone visited, hit a high mark of 80,000 fairgoers in 1918.

World War I strongly impacted the Great Allentown Fair. On May 28, 1917, the Secretary of War approved and signed a lease to use the Allentown Fairgrounds as a training center for the United States Army Ambulance Service.

Camp Crane, as the Army Ambulance base was known, transformed the fairgrounds from June 1917 to April 10, 1919 suspending Fair operation those years. Instead of spectator seats, the Grandstand tiers held army cots for the soldiers, many of them medical students and young doctors, who came from all parts of the country.

In 1919, the Fair resumed and introduced auto racing for the first time on its famous track.

The 1920s roared in with the new attraction on the racetrack—auto racing. Harness racing was still the favorite event, but now the sulky drivers shared attention with the motor speedsters.

In 1922, the Society anticipated future growth by purchasing a 212-acre plot in South Allentown along “Emmaus Pike” (Lehigh Street). Although it did not immediately plan to relocate the Fair, the Society held this property for years in expectation of expansion.

A sign of the times, on August 24, 1922 a Fair customer won the bid “for the removal of manure and paper” during fairweek. He offered a price “similar to former years…$240 for the entire week.”

The 1923 Fair introduced a new type of grandstand show and a new show producer who began his 32-year reign as the Allentown Fair’s king of the revue. George A. Hamid, who performed as an acrobat at the 1914 Fair, brought a Vaudevillian-style production to the Grandstand stage.

The night Fair debuted when Edmund H. Scholl took the reigns as the Society’s President in 1925. The Fair opened every day at 8 a.m. George Hamid’s revues were increasing in popularity and kept fairgoers on the grounds during the evenings. 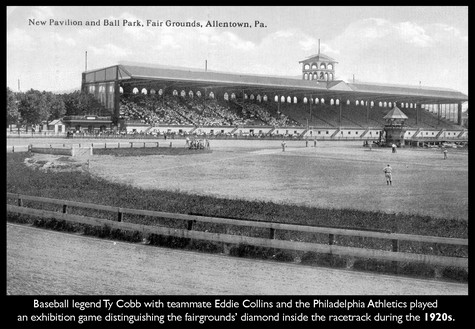 Baseball legend Ty Cobb with teammate Eddie Collins and the Philadelphia Athletics played an exhibition game distinguishing the fairgrounds’ diamond inside the racetrack during the 1920s. The field, home to minor league professional teams from the early 1900s through the 1930s, also was the site of a little Allentown High School baseball history.

In 1929, Fair concessionaire Billy Ritz asked the Society if he could operate a permanent eating stand on the grounds year-round. The Society agreed to lease a frame building just east of the Grandstand, and the famous Ritz Barbecue opened for business.

The traditional Cavalcade -  the exhibitors’ parade with the exposition’s horses and cattle judged “best,” had always been at 10 a.m. In 1929, with the advent of greater activity in the afternoons and evenings, Fair officials plucked the Cavalcade out of the morning itinerary and showcased it at 4 p.m. winning rave reviews from the Grandstand faithful.

The 1930 75th Anniversary Fair drew thousands to see Victor Zacchini, “the Master Sensationalist,” who shot himself out of a cannon. Not to be outdone, the actresses in the musical comedy revue at the Grandstand were adorned from their fancy headgear to their silk slippers in the finest creations from Paris, France!

In 1935, Charlie Fenstermacher and his well-known "Rube" band, with its comical costumes, provided spirited music at a Used Car Show along the Fair's midway.

Deep into nation’s Depression, theatrical agent George Hamid lightened the spirits of fairgoers with his night revues featuring a bevy of chorus girls. In 1935, he produced “The World on Parade” with girls costumed in international attire performing in giant water ballets.

More showgirls, more pageantry - George Hamid continued with his winning combination offering the grandstand crowd “The Fascinations of 1936.” In 1939, he outdid himself bringing a cast directly from the New York World’s Fair to perform the “Revue of Tomorrow.”

Open to traffic - the Society decided to open the grounds to vehicular traffic all year long in 1936. Prior to this time, the auto gates were only opened during special observances. A year later, the Ritz Barbecue gets a brand spanking new two-story brick home replacing its former frame structure.

1936’s unique and unusual attractions drew crowds: a jungle fowl from the Island of Bali and Queen Victoria of England’s 96-year-old bed, which was a valuable exhibit, piqued the curiosity of fairgoers. 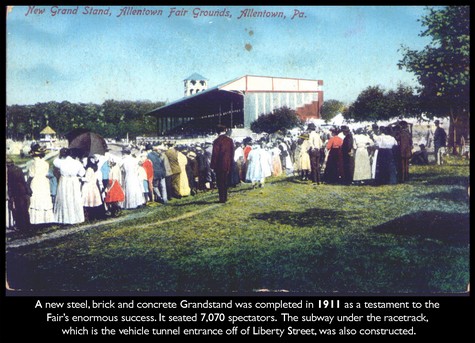 In 1937 popular "Chief White Eagle" and his bull snake from Oklahoma lectured on the value of herbs on the human body. His snake was a "come-on."
The World of Mirth, the carnival company that supplied thrilling rides, games and shows from the 1930s through the 1950s, presented a “Midget Village” in 1939 featuring the world’s only twin midgets - Mike and Ike.

The new decade produced a change—for the first time in the Fair’s history, the 1940 gate attendants and ticket takers wore maroon and gold uniforms.

Cotton Candy became the rage in 1940 with the invention of the cotton candy machine. Sugar granules are placed in a heated spinning disc, which melts the sugar and rapidly throws out strands of pastel-colored, cottony sweetness.

Ahmed, a Hindu from Punjab, India gathered crowds on the midway of the 1940 Fair selling his herbs and oils. His advice for good health - “Don’t drink liquor, don’t eat canned foods and don’t jitterbug!”

The 1940 Grandstand revue was “Echoes of Broadway,” another George Hamid spectacular this time featuring Broadway’s famous dancing girls the “Roxyettes” from the famous New York City Roxy Theater. The show was brought back for an encore in 1941.

In 1941, an Infantile Paralysis (Polio) epidemic closed the Allentown Fair to boys and girls under the age of 17. It only happened one time before in 1916. So angry at being banned from their favorite annual event, Allentown High School students went on strike from school. Police caught boys trying to climb the Fair’s fences. Signs posted inside and outside the fairgrounds read - “We miss the children at the Fair but we want to protect them from Polio.”

Billed as the most thrilling show of the modern world. “Lucky” Teeter and his Hell Drivers tore up the track at the 1941 Allentown Fair. Less than two months later, the world was at war.