The “Great” Allentown Fair, as it was dubbed in 1889 when it moved from what now is fondly referred to as the Old Fairgrounds to its larger location on 17th and Chew streets, was about to enjoy its most celebrated period of growth and evolution. History would be made on the new half-mile racetrack that was renowned as one of the best in the country for the sulkies and the trotters. Beautiful exhibition buildings did justice to the bounteous displays of agriculture, horticulture, domestics and fine arts. 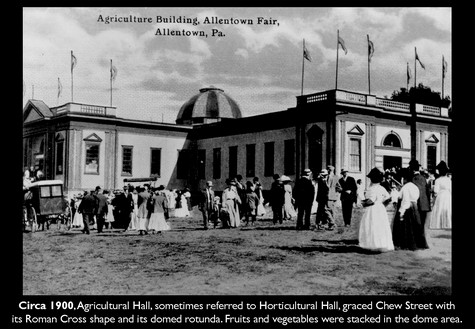 February 5, 1889 - Society officers were authorized to sell the old fairgrounds at public sale to the highest bidder. The sale of the property divided into plots garnered $35,000. The old grounds, known for its chirping blackbirds that inhabited the shade trees, were given over to the expanding Allentown neighborhoods of neatly aligned row and twin homes.

The new Fairgrounds was located on 17th Street between Chew and Liberty streets. It boasted a lush tree-dotted grove on its east side, and had room for a half-mile track, a large grandstand, numerous exhibition buildings and stables the Society desired.

Spring 1889 - work began immediately to ready the new grounds for its first Fair. Many structures were transferred from the old grounds and re-erected on the new, including Mechanics Hall, Floral Hall, the beer stand and the livestock shelters.

The first Fairgrounds Hotel, a small frame building for lodging and dining, rose on the corner of 17th and Liberty streets near the beer stand—1889. The second brick structure that still stands today went up in 1904 when there was a need for increased occupancy.

A new Main Exhibition Hall with 16,000 square feet to accommodate needlework, fine arts and other displays went up along Chew Street—1889.

The corner of 17th and Chew - became the main entrance for the Fair with turnstiles and gates installed. A two-story cottage building with eastern and southern porches was built to serve as the quarters for the treasurer and his clerks and as a year-round residence for the grounds keeper.

The finest track in the East was the aim of the Society. Engineers and contractors were instructed to build it in accordance with the principles and contour recognized by the most experienced turf men-1889.

The new half-mile oval was 50 feet wide on the backstretch and 80 feet wide on the home stretch with the proper slopes at the turns. A new wooden grandstand for 2,500 spectators rose and had the added features of a president’s office and dining rooms—1889. 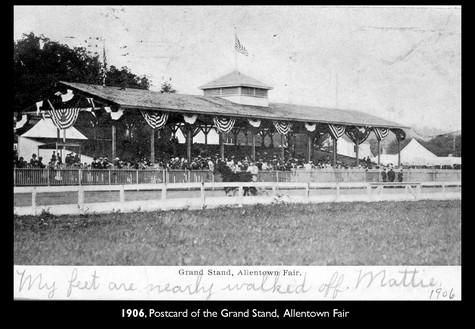 September 1889 - the new grounds were ready for the first Great Allentown Fair. Exhibits poured in in record numbers, and the Society and the public anticipated a spectacular run. Alas, rain drenched the first Fair on the new grounds! The sulky races were cancelled.

The 1889 Season had its races three weeks later to the delight of the Society and the public. A new record was set at the time trials establishing the pace for a flourishing Fair throughout the 1890s.

In 1897, additional acreage was purchased to bring the grounds up to 51 acres and to provide a west end of much needed space for sprawling outdoor farm implement exhibits and additional livestock shelters.

The turn of the Century was a tremendous building period, which produced some architecturally striking structures. A horse exhibition building with Victorian-styled windows and turrets complemented Floral Hall, an interesting hexagonal structure with a gingerbreading effect trimming its Pagoda-style roof.

Two poultry houses went up along Chew Street with window-lined second levels to excellently light the exhibits. The second building, erected in 1902, still stands inside the southwest Fairgrounds Gate 3, and is currently the oldest building on the grounds.

Circa 1900, Agricultural Hall, sometimes referred to as Horticultural Hall, graced Chew Street with its Roman Cross shape and its domed rotunda. Fruits and vegetables were stacked in the domed area.

September 23-28, 1901 - the Society celebrated its Semi-Centennial at the Fair and festivities carried over into 1902, the actual 50th anniversary year. The famous Allentown Band was aided by soloists from Philadelphia and New York. Novelty acts in front of the Grandstand included equilibrists, acrobats and bicyclists, and the midway boasted several attractions imported from the Pan American Exposition in Buffalo, New York. 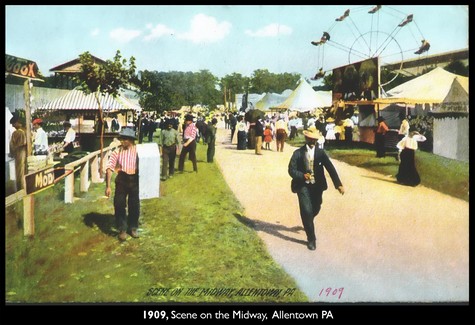 Fairgoers in the 1900s enjoyed arts, mechanical and agricultural exhibits in the buildings lining Chew Street, an increasing number of carnival attractions on a midway lying between the exhibit buildings and the grandstand/racetrack, musical entertainment in a band shell in the grove, daily sulky racing, novelty entertainment in front of the grandstand, and acres and acres of farm exhibits.

Famous Pace Horse Dan Patch set a long-standing harness race world mark in 1905 with his exhibition mile in 2:01! He then set a never topped world record drawing a four-wheel wagon in 2.05. The horse’s appearance also set a Fair race attendance record with 80,000 spectators surrounding the track, some taking their vantages in the trees.

Little Egypt, one of the “hootchie-koochie” and muscle dancers, produced a sensation in 1906 for the mere admission price of 10-cents.

The 1907 exposition featured the Igorrote Tribesmen from the Philippines and a five-legged cow. “The Flying Machine,” a Lincoln Beachey airship filled with a mixture of sulfuric acid and water also debuted. The show returned with additional ships in 1909.