January 24, 1852 - Leading farmers and enterprising citizens traveled on horseback and in drawn carriages from the far reaches of the County of Lehigh. They proceeded to the public house of William Leisenring in the village of Egypt, Whitehall Township. There it was resolved, as the culmination of a series of meetings in 1850 and 1851, to form an agricultural society with its aim being “the improvement and advancement of agriculture, horticulture, livestock and the domestic and mechanical arts.” To fulfill this mission, gentlemen representing every municipality in the County were appointed to lead the planning of an exposition. This celebration of the harvest would award the achievements of farmers and homemakers while entertaining the public.

The Allentown Fair was born.

February 2, 1852 - The Lehigh County Commissioners formally recognized and chartered the Lehigh County Agricultural Society. The new Society quickly adopted a constitution and chose Allentown, the county seat with its population of 3,779, as the location for its first Fair.

October 6, 7 and 8, 1852 - the first “Lehigh County Agricultural Fair” operated on a five-acre plot east of south Fourth Street, between Walnut and Union streets. Admission into the grounds was 25-cents. The Fair opened at 6 a.m. and closed at 6 p.m.

The first Fair was enclosed by a seven-foot-high, white muslin screen intended to arouse curiosity while preventing outsiders from viewing the activities. Inside, the “extravagant” attraction Stephen Lentz’s Flying Coach—a horse-drawn wagon holding an improvised orchestra—moved throughout the grounds entertaining fairgoers.

The first Fair’s premiums, the cash awards to exhibitors for excellence in livestock, farm implements, farm and dairy products and homemaking skills, totaled $163.50. The award ceremony at the Fair’s climatic conclusion was marked by grand speeches from distinguished guests. 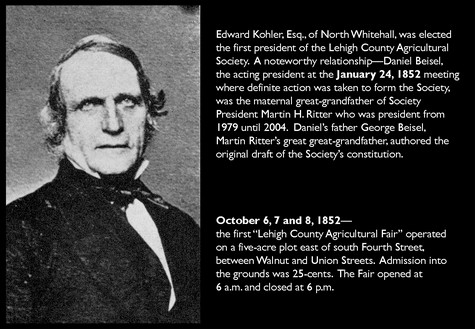 In 1853, the Society sought a permanent and larger location for its fledgling Fair. An eight-acre tract north of Liberty Street between Fifth and Sixth streets was leased from William Mattern.
The new Fairgrounds on Liberty Street began to take shape in 1853. Frame buildings including a two-story exhibition hall and a cottage-style ticket office were constructed. A wooden fence was installed to enclose the grounds.

September 28, 29 and 30, 1853 - the second Fair, the first at the new Fairgrounds, showcased an amusement ride. Allentonian Lewis Lentz provided a merry-go-round he constructed. Riders on stationary carousel horses and benches marveled as a single horse powered the amusement by walking inside a circular platform.
The second Fair exceeded the results of the first and encouraged the Society to continue enhancing the fairgrounds. A one-third mile racetrack and small wooden grandstand were built and together became a centerpiece. Shade trees that transformed the grounds into “one of the loveliest and most attractive spots in Allentown” were planted.

Harness racing soon caught on as a premier attraction of the early Fairs and novelty acts started performing in front of the grandstand to amuse fairgoers waiting for the next race.

August 18, 1855 - the Lehigh County Agricultural Society was incorporated as a nonprofit shareholder organization with its members allowed to own no more than one share issued at $10 each. This adoption helped the Society with funds to purchase acreage necessary to accommodate the Fair, erect and repair buildings and pay premiums.

In 1856 the Society purchased the eight-acre Mattern tract for $2,000 and added to it three additional acres owned by Owen Saeger for $1,085. The Lehigh County Agricultural Society became the owner of its own fairgrounds.

Civil War divided the nation and its ravages brought sorrow and mourning to many families in Lehigh County. The Fair had been held annually for a decade, but it was suspended for one year in 1862. 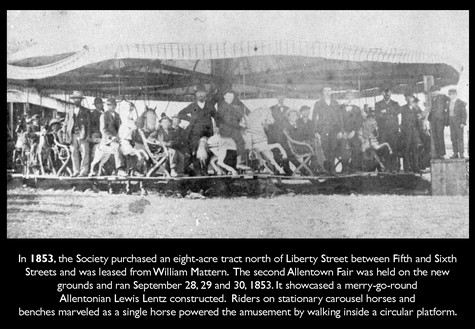 In October 1862, seven companies of the 176th Pennsylvania Militia occupied the Fairgrounds before being mustered into service and departing from Lehigh Valley Station on their way to the battlefields.

After 1862, the grounds were used annually for the Fair, increasing in interest as well as in attendance with each new year's exhibition. The use of the grounds frequently was granted for Fourth of July celebrations, political gatherings, Sunday school picnics, and other civic assemblages.

Prior to the 1876 Centennial World’s Fair in Philadelphia, the Lehigh County Ladies' Centennial Association held a Centennial Fair and Tea Party on the fairgrounds and produced a re-enactment of the Revolutionary War’s Battle of Bunker Hill. Proceeds went to the World’s Fair.

In 1882, the Society acquired additional acreage when President Jeremiah Roth secured a 15-year lease from Robert J. Yeager at an annual expense of $180. The Fairgrounds was now 14 acres.

By 1888, the Fair and its harness racing were so popular that 59 special trains carried people from all over Pennsylvania to its gates and the receipts totaled $10,000.

October 29, 1888 - the Fair’s Executive Committee adopted a resolution favoring the purchase of a larger plot of land for the erection of an adequate racetrack, grandstand and other buildings and venues to accommodate the expanding Fair, which had become “too great for its own good.”