The Lehigh County Agricultural Society is the nonprofit owner and operator of The Allentown Fairgrounds and The Great Allentown Fair. The Fair is the fulfillment of the Society's mission as stated in its bylaws.

The object of the Society is and shall remain the improvement and advancement of Agriculture, Horticulture, Livestock, Domestic and Mechanical Arts and the entertainment of its membership and patrons.

The annual operation of The Great Allentown Fair for more than a century and a half is testament to the viability and durability of the Society's mission conceived in 1852. The 21st Century version of the Fair is steeped in the tradition of its rich agricultural roots while highly emphasizing education for the non-agrarian public. Its diverse entertainment offerings attract attendees of all ages and tastes.

The activities that occur on The Allentown Fairgrounds year-round support the mission and perpetuation of the Fair. The trade shows, restaurants and the famous Fairgrounds Farmers Market combine to make the 46-acre fairgrounds located in the city's beautiful west-end a hub for enjoyment, commerce and tourism.

Other than at Fair time, the Lehigh County Agricultural Society generously allows vehicles to pass through its gates and traverse the grounds in order to keep the city's traffic flow unimpeded. With its unencumbered area and major exhibition building, the property is dedicated for emergency and disaster usage. The Fairgrounds has been the site for the organization of city parades, high school band practice and other donated uses to better the community.

Please join the Society in rewarding the achievements of farmers, gardeners and homemakers at the annual Allentown Fair, the multi-faceted educational and entertainment extravaganza that attracts not only over a half-million visitors each year, but thousands of participants in its competitive exhibits.

In 2017 we celebrated the 100th Anniversary of Camp Crane 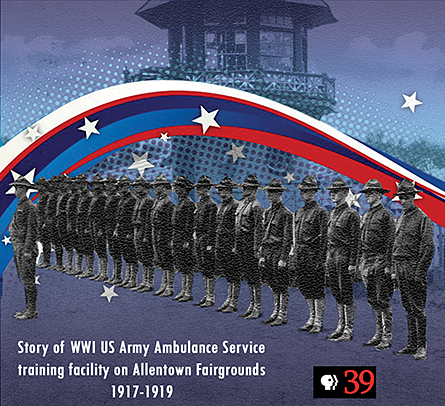 On May 24, 1917 the officers of the Lehigh County Agricultural Society signed a lease
with the United States government that initiated an amazing transformation of the Allentown Fairgrounds
from its dedicated use for the operation of the annual Great Allentown Fair.
Read More